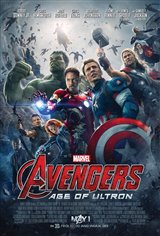 The Avengers—Iron Man (Robert Downey Jr.), Captain America (Chris Evans), Thor (Chris Hemsworth), The Incredible Hulk (Mark Ruffalo), Black Widow (Scarlett Johansson) and Hawkeye (Jeremy Renner)—come together once again when the fate of the planet is hanging in the balance.

Stark's artificial intelligence experiment goes terribly wrong and ultimately creates the villain Ultron (James Spader), who thinks he is protecting the Earth by destroying humanity. The other Avengers struggle with trust after Stark kept them in the dark about the experiment, but they realize they need to work together in order to protect the world.

Meanwhile, Russian twins Black Witch (Elizabeth Olsen) and Quicksilver (Aaron Taylor-Johnson) are also working against the Avengers, believing Stark to be responsible for their parents' death.