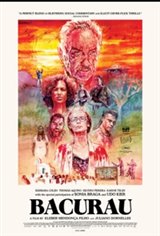 In Bacurau, a Brazilian village cut off from the world, a matriarch's funeral marks the return of her granddaughter and a freedom fighter, who’d carried out political attacks in Sao Paulo. Strangely absent from the country's cartographic surveys, Bacurau has also had its water supply cut off thanks to a decision by the corrupt regional deputy. Casually, the latter comes to campaign for reelection. The reception is icy and his offerings — old books for the library, expired food and addictive drugs — don’t have a positive effect on the mood of voters. Things go from bad to worse when the region becomes the scene of a series of murders as mysterious as they are cruel. When a youngster is shot in cold blood by a killer hiding in the shadows, a mythical local hero is called to the rescue.