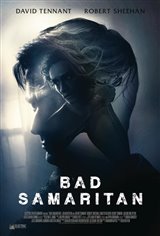 Sean Falco (Robert Sheehan) and Derek Sandoval (Carlito Olivero) work as valets. They develop a clever scam to burglarize the houses of their wealthy customers. When a car is left with them, Derek stands as a lookout while Sean drives to the owner's house in the car and robs the place. Things go smoothly until he tries to rob Cale Erendreich (David Tennant) and discovers a young woman (Kerry Condon) being held captive in his home.

When Sean runs out of time and has to return the car, he leaves the woman there and brings the car back to Erendreich in order to avoid suspicion, then contacts the police. When they ask what he was doing there, he has to admit to being a burglar. In addition, because the police don't find the woman during their investigation, Sean and Derek are in danger themselves when Erendreich seeks revenge on them as they desperately try to find and rescue the captive woman.