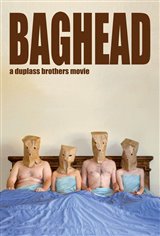 While the Duplass Brothers were shooting their last feature film The Puffy Chair, a crew member raised the question "what's the scariest thing you can think of?" Someone immediately said "a guy with a bag on his head staring into your window." Some agreed, but some thought it was downright ridiculous and, if anything, funny (but definitely not scary).

Thus, BAGHEAD was born, an attempt to take the absurdly low-concept idea of a "guy with a bag on his head" and make a funny, truthful, endearing film that, maybe, just maybe, was a little bit scary, too.