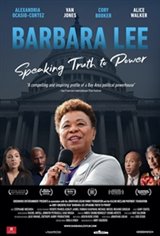 Barbara Lee: Speaking Truth to Power, a feature length documentary, tells the complex story of Representative Barbara Lee, a steadfast voice for human rights, peace and economic and racial justice in the US Congress who cut her teeth as a volunteer for the Black Panther Party and was the lone vote in opposition to the broad authorization of military force following the September 11th attacks.

In 2001, she issued a strident warning in the House of Representatives: ?Let us not become the evil we deplore," and today she continues that clarion call, demanding that Congress stand up to a president who has escalated tensions with numerous foreign governments, while seeding division within his own country.