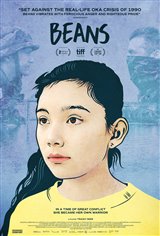 Beans is a coming-of-age story, inspired by co-writer/director Tracey Deer’s own experience as a 12-year-old Mohawk girl who had to grow up fast during the 1990 Oka Crisis, a 78-day armed stand-off between the Quebec/Canadian governments and the Mohawk who were peacefully protesting a golf course expansion that would desecrate their burial ground.

Beans (Kiawentiio) lives with her caring parents (Rainbow Dickerson and Joel Montgrand) and her little sister (Violah Beauvais) on the Mohawk reserve of Kahnawà:ke, Quebec, where the two girls happily play in the woods. Unprepared for the racism and violence that the Oka Crisis brings, Beans decides to transform into her own kind of warrior.