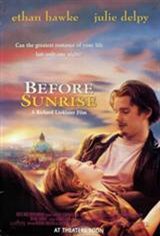 Richard Linklater's third feature -- set, like his other works, over the course of one 24-hour period -- Before Sunrise is a sweet, intelligent romantic comedy filmed primarily in Austria. It stars Ethan Hawke as Jesse, a young American travelling through Europe. On a train he meets Celine, a French student portrayed by Julie Delpy.

Together they leave the train to begin exploring the city of Vienna, walking and talking into the wee hours of the night and slowly falling in love as the minutes before Jesse's return to the U.S. tick away.