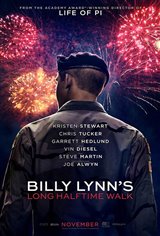 Based on Ben Fountain's novel of the same name, this war drama tells the story of 19-year-old Billy Lynn (Joe Alwyn) after he and seven other soldiers are brought back home to the U.S. "Victory Tour" following a particularly harrowing battle in Iraq. As the tour continues, Billy discovers an unsettling truth and becomes increasingly disenchanted with the way war heroes are treated. Through various flashbacks, we uncover secrets about Billy's past and what really happened in Iraq.