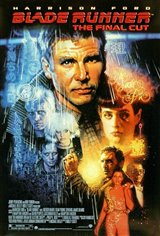 In honor of its 25th anniversary, Ridley Scott's science fiction masterpiece, Blade Runner, starring Harrison Ford, is making a long-awaited return to the big screen with a completely re-mastered director's cut, Blade Runner: The Final Cut. The film has not only been completely restored with new and improved special effects, but also includes never-before-seen added and extended scenes that Ridley Scott created specifically for the new edition.

Spectacularly restored and re-mastered from original elements and scanned at 4K* resolution, fans of the original Blade Runner will have a chance to see this sci-fi classic as it has never been seen before, while a new generation of moviegoers will have their first opportunity to see why Blade Runner is still considered to be, by both critics and fans, one of the most important genre films of the 20th century.

Visually spectacular, action-packed and enduringly provocative since its original 1982 release, the stylish noir thriller Blade Runner: The Final Cut stars Harrison Ford in the enigmatic role of 21st-century detective Rick Deckard. As he hunts for vengeful, fugitive replicants in a high-tech future soured by urban and social decay, he is drawn to a mysterious woman (Sean Young) whose secrets may undermine his own soul.