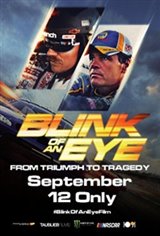 Blink of an Eye

Fathom Events and 1091 Media bring BLINK OF AN EYE to the big screen for an exclusive premiere event.

Based on the New York Times bestselling book of the same name, the film focuses on Michael Waltrip and his star-crossed friendship with the iconic driver, Dale Earnhardt Sr. On the last lap of the Daytona 500, Waltrip held the lead with Earnhardt Jr. in second and "Sr." in third.

Earnhardt Sr. blocked the field of 40 cars to allow his friend to take his first checkered flag. Waltrip never had the opportunity to celebrate with Sr., as the legend was killed on that last lap.