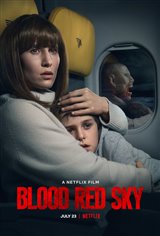 A transatlantic flight to the U.S. is taken over by a team of hijackers. Caught in the nefarious plot is a mysteriously ill woman and her son. When chaos breaks out and the son runs in fear, the young mother attempts to chase him, but is mercilessly gunned down by one of the hijackers.

Seemingly dead, the woman comes back to life as it is revealed she is a vampire. Left with no choice, she submits to her inner evil and unleashes her vampiric nature in order to combat the hijackers and protect her son.