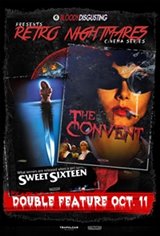 The "Retro Nightmares" series will be selected by fans on the Bloody Disgusting website, who will vote from 10 films, with the most in-demand titles shown in a three-night series during the Halloween season.

Films for consideration include Amityville: The Evil Escapes, Don't Go In The House, Day of the Animals, Grizzly, The Convent and House on Sorority Row, all of which have been digitally remastered.