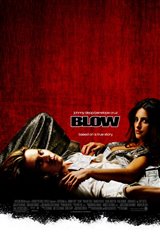 Based on a true story, the film focuses on George Jung (Depp) who decides against the workforce his father (Liotta) chose to dedicate his life to, and sell marijuana to pay for his independent lifestyle.

When an arrest lands him in jail, he connects with an inmate, Diego (Molla), who leads him to a very wealthy cocaine dealer in Columbia. The two make a deal and Jung begins one of the largest international drug trades the States had ever known.

While with Diego, Jung is introduced to a party-girl named Mirtha (Cruz) who he falls heavily for, marries and has a daughter with. Now with more money than he knows what to do with, Jung doesn't want his daughter to see him as just a drug dealer.