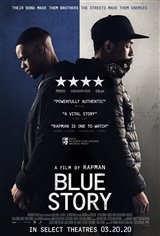 Best friends Timmy (Stephen Odubola) and Marco (Micheal Ward) go to the same high school in Peckham, but live in neighboring London boroughs. When Marco’s beaten up by one of Timmy’s primary school friends the two boys get into a fight.

Their friendship is further destroyed when Marco's brother Switcher, an upper gang member, gets involved in a fight with Timmy.

Timmy and Marco wind up on rival sides of a never-ending cycle of gang war in which there are no winners … only victims.