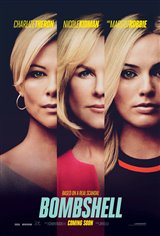 After confronting Donald Trump during the first Republican primary debate in 2015 about the heinous sexist remarks he's made about women, Fox anchor Megyn Kelly (Charlize Theron) has to endure the fallout, which includes being called a bimbo by him on Twitter, among other things.

Another Fox anchor, Gretchen Carlson (Nicole Kidman) suffers her own indignity at the hands of their misogynistic boss, Fox News founding CEO Roger Ailes (John Lithgow), after she dares to appear on TV without makeup in an effort to show young women and girls that they are beautiful with or without painting their faces.

Meanwhile, a wide-eyed new hire named Kayla Pospisil (Margot Robbie), a self-described Evangelical millennial and a Fox worshipping researcher, has dreams of becoming an on-air host. Along with all the other women at Fox, she wears a tight, short dress, because the order from Aisles is that all women who work for him show a lot of leg. When she finally gets a chance to meet with Aisles, she's asked to do things that leave her disenchanted.

When Gretchen grows tired of the constant abuse and harrassment, she finally decides to take action. Now, she has to wait to see if the other women will come forward as well.

Based on the real scandal.