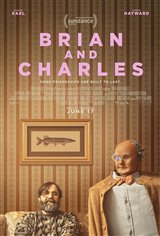 Brian (David Earl) is a lonely inventor in rural Wales who spends his days building quirky, unconventional contraptions that seldom work. Undeterred by his lack of success, Brian attempts his biggest project yet. Three days, a washing machine, and various spare parts later, he's invented Charles, an artificially intelligent robot who learns English from a dictionary and has an obsession with cabbages. His success with Charles draws the attention of many locals, including Hazel (Louise Brealey), who encourages Brian to open up as the two become romantically involved.

As the unlikely friendship between Brian and Charles grows, they struggle through their changing dynamic as Charles yearns for more independence.