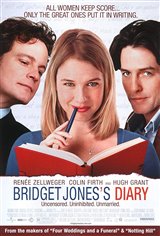 Based on the bestselling novel by Helen Fielding, Bridget Jones's Diary is the story of a year in the life of a single British woman (Zellweger) in her 30s who works in the publishing industry.

She a tad overweight, drinks heavily, smokes cigarettes constantly, has an affair she might regret, and does other things people do, including going to parties where married friends and family worry about her being a "Singleton".

Received an Academy Award nomination for Best Actress in a Leading Role.