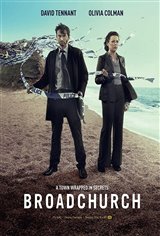 When the body of a boy named Danny Latimer is discovered on the beach in Broadchurch, a small coastal town, it creates quite a stir. His parents, Beth and Mark Latimer (Jodie Whittaker, Andrew Buchan), didn't realize he was missing for hours, because they assumed he'd been out doing his paper route first thing in the morning before school. As it turns out, he was killed the night before.

Detective Inspector Alec Hardy (David Tennant), new to the town, and Detective Sergeant Ellie Miller (Olivia Colman), a longtime resident, work together to put the pieces together, but they find that few people are entirely honest about their whereabouts on the night Danny was murdered.