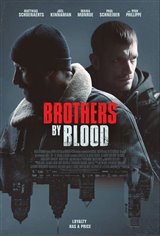 Years earlier, after losing his parents, Peter (Matthias Schoenaerts) went to live with his aunt and uncle, and his cousin Michael (Joel Kinnaman). Peter's uncle controlled the shady side of union labor in the city, and years later, that responsibility was passed on to Michael. Unfortunately, Michael doesn't know much about running a business.

When his power is threatened by the Italian mob, Michael finds himself in hot water. He tries to convince a reluctant Peter to help him run the operation.