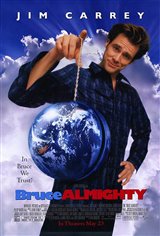 Bruce Nolan (Carrey) is a "human interest" television reporter in Buffalo, New York who is discontented with almost everything in life, despite his popularity and the love of his girlfriend Grace (Aniston). At the end of the worst day in his life, Bruce angrily ridicules and rages against God -- and God responds. He appears in human form (Freeman) and, endowing Bruce with all of His divine powers, challenges Bruce to take on the big job and see if he can do it any better.