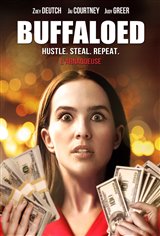 Peg Dahl (Zoey Deutch) has always dreamed about getting into an Ivy League school and getting out of her hometown of Buffalo, New York. After she is accepted to the school of her dreams, Peg realizes she won’t be able to afford tuition and comes up with a crazy scheme that lands her behind bars.

After her release, both Peg and her mother are deep in debt, but Peg uses the opportunity to enter a new career in the shady business of debt collection.