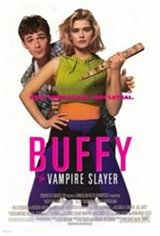 The idea of fusing teen sex-comedy and horror genres into a boffo box-office bonanza seems like classic braindead Hollywood-think... but somehow, beyond all reason, the makers of this film manage to pull it off. Much of the credit goes to director Fran Rubel Kuzui (Tokyo Pop) who chooses wisely to let the jokes and action rip by so quickly that viewers won't have time to realize there's practically nothing going on. Also excellent is Kristy Swanson as the bubble-headed cheerleader who learns from a Van Helsing-ish stranger (Donald Sutherland) that she's, like, the reincarnation of this pure female warrior and stuff, destined to rid the world -- or at least the Valley -- of vampires. No sooner is the Buffster being schooled in the ways of vampire butt-kicking (much to the consternation of meek pretty-boy beau Luke Perry) than the lead vampire (Rutger Hauer) and his leering cronies show up -- and leading up the pack is none other than Pee-Wee Herman himself, Paul Reubens. Fans of this film's popular TV offspring will appreciate the fang-sharp humor but may be surprised to find little evidence of the spooky atmosphere that permeates the series -- though there are some inspired moments, particularly the ridiculous death-by-ruler scene.