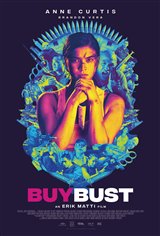 Manigan, Yatco and the rest of their unit are assigned to taken down drug lord Biggie Chen. They have the help of drug dealer/stool pigeon Teban. The team descends into the seedy underbelly of a shantytown named Gracia ni Maria in Manila. Undercover agents are supposed to lure a drug dealer into a bogus deal so the agents can step in and arrest them. However, the sting operation quickly goes wrong and Manigan and her team find themselves trapped, hunted not only by the drug gangs, but the angry civilians who blame the police for their oppressed existence.