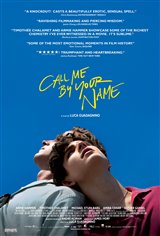 Call Me by Your Name

Teenager Elio Perlman (Timothée Chalamet) is spending the summer of 1983 at his parents' cliffside mansion on the Italian Riviera. His days are filled with a variety of cultural activities, including transcribing classical music, reading books, and hanging out with his friend Marzia (Esther Garrel).

Things change for Elio when a charming American named Oliver (Armie Hammer) arrives to intern for Elio's father (Michael Stuhlbarg), who is an eminent professor specializing in Greco-Roman culture. Elio develops feelings for Oliver, and is pleased when those feelings are returned.

Based on the novel by André Aciman.