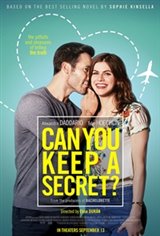 Can You Keep a Secret?

Emma Corrigan (Alexandra Daddario) is a nervous flyer. When the plane she's on experiences extreme turbulence to the point where suitcases are falling out of the upper compartments, she thinks they're going to crash and she's about to die. Believing these to be her last moments, she spills her inner, most humiliating secrets to a stranger on a plane. At least, she thought he was a stranger...

Until she later meets Jack Harper (Tyler Hoechlin), her company's CEO, who now knows every embarrassing detail about her.

Based on the hilarious New York Times best-selling novel by Sophie Kinsella.