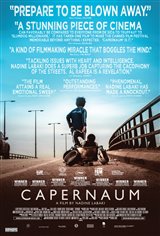 A politically-charged story featuring mostly non-professional actors, about a child in Beirut who launches a lawsuit against his parents.

Zain (Zain Al Rafeea) is a little boy who doesn't know his age (his parents haven't kept track and don't have a birth certificate). He lives in chaos and squalor in the slums of Lebanon with his parents and a large number of siblings. His older brother is in jail, and the family provides him with illegal prescription drugs to sell to the other inmates.

When Zain's best friend, his young sister Sahar (Cedra Izam), is sold to their landlord who wants her to marry his son, Zain runs away.

Life isn't any easier outside of his parents' apartment, and Zain eventually winds up in prison for stabbing someone. While there, he launches a lawsuit against his parents because he wants them to stop having children and neglecting them, leaving them to fend for themselves.