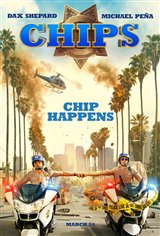 Based on the popular '70s television series of the same name, this spoof film adaptation centers around an FBI agent who is given the alias Francis "Ponch" Poncherello (Michael Peña) and rookie Jon Baker (Dax Shepard).

The two meet when they're put together as partners to go undercover to expose crooked cops within the California Highway Patrol. Jon is excited about it, because he feels the fancy new uniform will impress his wife and save his marriage. While Ponch feels Jon is too intimate with other people, Jon sees Ponch as being too tough and lacking emotion and has a great time teasing him about it.

When they discover the dirty cops are carjackers, led by Vic Brown (Vincent D’Onofrio), they have to come up with a plan to take them down.