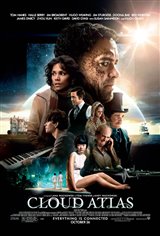 The lives of these seemingly unrelated characters are inexplicably linked through fate, chance and emotion. As each character faces dilemmas—whether issues of life or death or establishing liberation from a life of slavery or servitude—Cloud Atlas arches on the belief that our actions and destinies may not always be our own and the sometimes unexplainable feelings of reincarnation and déjà vu that humans experience have actual meaning.