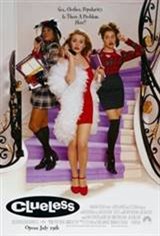 Cher Horowitz (Alicia Silverstone) comes from a very wealthy family. Her life is one of privilege, although her former stepbrother Josh (Paul Rudd) keeps popping in to annoy her. Along with her equally popular friend Dionne (Stacey Dash), Cher rules the school. Although Dionne has a boyfriend, Murray (Donald Faison), Cher thinks high school boys are beneath her. She's waiting for college - and college boys.

When Cher and Dionne have success when they decide to better their marks by playing matchmakers for two teachers, they're inspired to take Tai (Brittany Murphy), a "clueless" transfer student under their wing. While Cher tries to make an advantageous match for Tai, she begins to think about maybe finding a boyfriend of her own, despite her earlier rule about no high school boyfriends. As she gives Tai a makeover, she learns about caring for others, going through pain, and love.