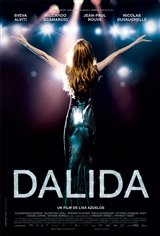 Born in 1933 in an Italian neighborhood in Cairo, Iolanda Gigliotti suffered from an unhappy childhood, which included physical abuse at the hands of her father, who was a changed man after returning from the detention camp where the allies sent him for alleged fascist sympathies. Nevertheless, on the threshold of adult life, Iolanda flourished.

Encouraged by her brother Bruno, she embarked on a career as a singer. Frenchman Lucien Morisse, the Program Director at radio station Europe 1, took Iolanda under his wing. Thanks to his flair and connections, Iolanda, renamed Dalida, became a worldwide star. But her immense success concealed a tragic personal life. An abortion in 1967 left her infertile, destroying her dream of becoming a mother. A series of suicides of lovers and friends followed, including her fiancé, Italian singer Luigi Tenco in 1967, her former husband Lucien Morisse in 1970 and her close friend Mike Brant in 1975. Additionally, in 1983, her former lover Richard Chanfray committed suicide, which left Dalida feeling that her life was unbearable.