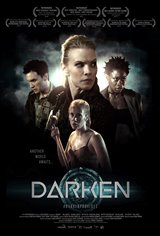 A young woman named Eve (Bea Santos) finds herself trapped within a bizarre realm after comes across a dying warrior in the street who casts an incantation on her. Now, she is stuck within a building that has an endless amount of labyrinthine rooms but no exit.

This place is a sanctuary created by an all-powerful god called “Mother Darken” who will protect those inside, but only as long as they are within the realm’s walls. Eve meets a rebel, Kali (Oluniké Adeliyi) who teams up with her in their pursuit for freedom from the horrors that await them inside every room.

In order to escape, Eve and Kali must join forces with other allies who refuse to swear allegiance to Mother Darken, and attempt a great escape from this prison-like building. But first, they must fight their way through its dangerous rooms and the evil forces who lurk inside.