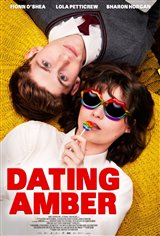 Ireland, 1995. Classmates Eddie (Fionn O'Shea) and Amber (Lola Petticrew) are teased about their sexuality, so Amber decides they should pretend to date in order to stop their fellow students from harassing them. Eddie, who is firmly in the closet, is determined to follow in his father’s footsteps and enlist in the military after graduation, hoping that it will make his "problem" go away.

Amber, who accepts the fact that she's gay, sets her sights on moving to London, where she can live a more open lifestyle. As they spend more time together, she and Eddie develop a close friendship, but as Amber witnesses Eddie's continued denial, she realizes that an unhappy future awaits her best friend unless she intervenes.