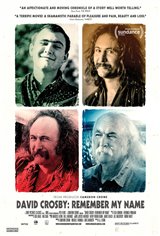 A look at legendary singer/songwriter David Crosby, who was a member of three supergroups: The Byrds; Crosby, Stills & Nash; and Crosby, Stills, Nash & Young.

The documentary takes a look at David's life from the wild days of the 1960s in Los Angeles, to the present time as he enjoys a rebirth of creativity, despite his past excesses and his estrangement from ex-band members, including Graham Nash and Neil Young.

He reflects on his life of music stardom, while forging new oaths to relevancy at the age of 77 in this deeply personal film.