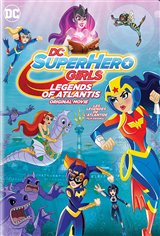 After studying archaeology abroad, Hawkgirl (voice of Nika Futterman) brings an ancient text to school, known as the Book of Legends, so she can study its scripture. Wonder Woman, Batgirl, and the rest of the DC Super Hero Girls recognize how powerful this mysterious book is and hurry to lock it away in a safe before it falls into the wrong hands. However, an ocean-dwelling thief named Siren senses the book’s presence and seeks to find it so she can obtain the Trident of Atlantis and control the entire ocean.

Siren overpowers the Super Crew and breaks into the safe to steal the book before setting out to find Aquaman, the King of Atlantis, so she can take his Trident. In order to save the people of Atlantis and Metropolis from Siren’s evil wrath, the Super Hero Girls must band together and set off on a mission into the ocean to find Siren and stop her from gaining the power of the Trident before it’s too late.