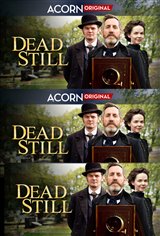 In 1880s Dublin, renowned photographer Brock Blennerhasset (Michael Smiley) is an expert at post-mortem photography, making his subjects look alive. His niece, aspiring actress Nancy Vickers (Eileen O'Higgins) helps him, especially after he's injured after taking a beautiful photo of a family with their loved one who has passed away.

While visiting a grave site after a negative goes missing, he encounters gravedigger Conall Molloy (Kerr Logan), who aspires to work in the field of photography. After Molloy goes on a mission to help Blennerhasset locate the missing negative, he gets a job as the photographer's assistant.

Meanwhile, police detective Frederick Regan (Aidan O’Hare) investigates a series of murders that have been staged to appear as suicides. He concludes that the serial killer has posed the victims as if they were about to be photographed. As the body count begins to escalate, Brock, Molloy and Nancy must stop a murderer intent on ending not just their business, but their lives.