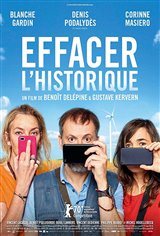 Marie, who is already in debt, is being blackmailed by a man who filmed her while they were making love. Two months earlier, her husband left her, and their teenage son joined him. Her friend Bertrand, widowed for two years, is also in debt. He devotes all his energy into trying to reach Facebook to get them to remove  a compromising video of his daughter from the social media platform. Their neighbor Christine, fired from the local nuclear power plant, has gone through retraining and now works in servicing cars. But her appreciation rating never exceeds one star, due to an algorithm manipulated by her competitors. Enraged by the Big Tech of the world, the trio of ex-Yellow Vests decide to go to great lengths to erase their data history.