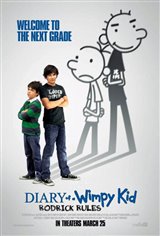 Greg Heffley (Zachary Gordon) has mastered middle school, rid himself of the Cheese Touch, and thinks he's got it all together. There's just one problem: his older brother Rodrick (Devon Bostick) is trying to ruin his life. As Greg begins seventh grade, he and Rodrick have to deal with their parents' misguided attempts to have them bond. Based on the book by Jeff Kinney.