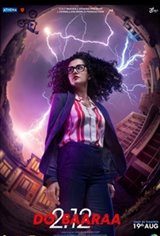 On a stormy night in 1994, a woman is murdered and the only witness is a 12 year old boy named Anay. At the same time 25 years later, on an identical stormy night, Antara's daughter goes missing.

Having given up her medical career for the sake of her husband, she moves into a new house with her family where she gets connected with Anay, run down by car 25 years earlier, through an old TV set. She ends up in the alternate reality she's created: one in which her life is completely different.