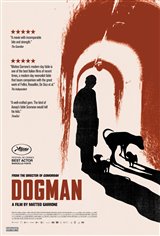 Marcello (Marcello Fonte) is a small and gentle dog groomer who sells cocaine on the side in order to make enough money to treat his teenage daughter, Sofia, who lives with her mother, to a lavish scuba diving vacation. His best customer, Simoncino (Edoardo Pesce), is a former boxer whose coke habit has made him even more violent and unstable. In fact, he routinely terrorizes the entire neighborhood.

Simoncino bullies Marcello into joining him on burglaries as his getaway driver, using the little van Marcello drives the dogs around in. Marcello goes along with Simoncino's demands, even saving his life after an attempted revenge hit. But when he realizes Simoncino expects him to do prison time, he draws the line.