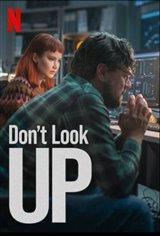 Astronomer Dr. Randall Mindy (Leonardo DiCaprio) is feeling enormous stress due to the knowledge that an incoming comet is predicted to have a severe outcome when it lands. He briefs President Janie Orlean (Meryl Streep) with the news in the Oval Office, but his extreme anxiety affects his breathing, discrediting the seriousness of his warning.

Fellow astronomer Kate Dibiasky (Jennifer Lawrence) further elaborates the severity of this incoming comet, but the news is downplayed by Jason Orlean (Jonah Hill), due to the number of end of the world briefings they've dealt with the past two years.

With no other options, Randall and Kate decide to go on a giant media tour to warn mankind that the approaching comet will destroy the planet.