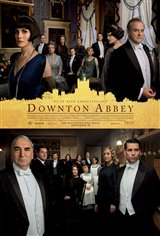 A big screen adaptation of the television series about the lives of the Crawley family and the servants who work for them at the turn of the 20th century in an Edwardian English castle.

It's now 1927 and the Lord and Countess of Grantham (Hugh Bonneville, Elizabeth McGovern) receive word that the King and Queen of England are coming to visit Downton Abbey. The servants begin polishing and cleaning every surface in anticipation of the royal visit, while Lady Edith (Laura Carmichael) returns to Downton Abbey with her daughter Marigold, and her husband, Bertie Pelham (Harry Hadden-Paton).

However, when Lady Mary (Michelle Dockery) feels that Thomas (Robert James-Collier) is unprepared to handle the job of Head Butler during the royal visit, she goes to find their retired butler Carson (Jim Carter), to convince him to return to service at Downton Abbey.