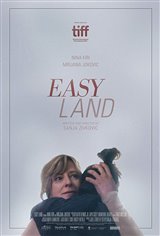 Serbian immigrant Jasna (Mirjana Jokovic) and her teenage daughter Nina (Nina Kiri) are recent refugees who are struggling to build a new life in Toronto.

Due to her lack of effort at school, Nina is repeating grade 12, but is bullied because the other students know about Jasna's (Mirjana Jokovic) mental health struggles.

Jasna's mental illness is linked to being traumatized by things she witnessed in Serbia. Despite being a trained architect, she works for a condescending boss at an interior design firm, where she feels her talents are being wasted. She finds solace as she makes a model of her dream building, which she calls Easy Land.

Meanwhile, Nina, who dreams of leaving her mother and moving back to Bosnia by herself, is given a work placement with a theatre troupe.