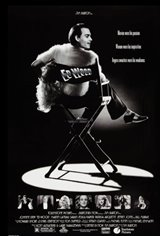 Hollywood visionary Tim Burton pays homage to another Hollywood visionary, albeit a less successful one, in this unusual fictionalized biography. The film follows Wood (Johnny Depp) in his quest for film greatness as he writes and directs turkey after turkey, cross-dresses, and surrounds himself with a motley crew of Hollywood misfits, outcasts, has-beens, and never-weres. The real story, however, is his friendship with aging, morphine-addicted Bela Lugosi (Martin Landau), whom he tries to help stage a comeback. Landau's unforgettable Oscar-winning performance must be seen to be believed, as must Rick Baker's Oscar-winning makeup. While it would have been easy to make a film simply ridiculing the bumbling director, Burton instead focuses on his driving passion for filmmaking and his unwavering persistence in the face of ridicule and failure. Possibly the most surprising aspect of the film is the genuine sentiment with which Burton treats the relationship between Wood and Lugosi; his devotion to Lugosi is touching, as is Lugosi's final soliloquy -- an inane bit of dialogue from the hilariously bad Bride of the Monster that grows into a poignant metaphor for the actor's life and ultimate triumph of his spirit. Even the look of the film is right; it manages to preserve the air of one of Wood's own films while retaining a sense of artistry in much of the composition on screen (note the scene at the drug rehab where Lugosi endures a horrifying night of detox). In all, Ed Wood is a unique film -- at times side-splittingly funny; at others, tragic or even frightening -- and a heartfelt tribute to the love of movies, good and bad alike.