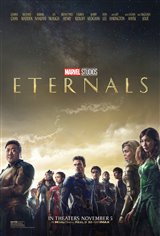 Although they physically resemble people, they each have a different power, including super strength, flight, teleportation, mind control, shape-shifting and energy projection. Since they've existed throughout history, many of the Eternals have lived among humans at times, scattered across the Earth.

However, as they were created only to step in when people are threatened by Deviants, the Eternals have never been able to stop the atrocities committed by humans against other humans. With the Deviants under control, the Eternals' lack of involvement in other matters doesn't sit well with several of the team of superbeings, which creates conflicts within their ranks.