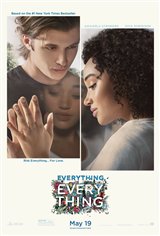 Maddy Whittier (Amandla Stenberg) is a teenager who is suffering from an immunodeficiency known as SCID. She has spent her whole life indoors. The only three people in her life are her mother, who is also her doctor; her caretaker Carla; and Carla's daughter Rosa. However, Maddie is content with her life and loves reading her books.

After a while, Maddy wants to meet Olly, who tells her stories about the outside world. It's not long before their friendship changes her life as she decides to leave her house and live her life to the fullest.

Based on Nicola Yoon's novel of the same name.