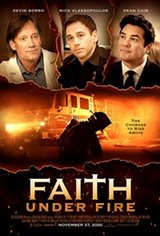 After an exhausting night saving a young girl from a raging house fire, Fireman Tom Hatcher is at the end of his rope. He couldn't save his wife from cancer - and worse yet - his six year old daughter, Tiffany, is now facing the same possible fate.

When he finds himself in a cold jail cell after attacking a pastor out of frustration with a seemingly absent God, Tom begins to reflect on his downward spiral into despair. But with the help and persistent friendship of the very man he assaulted, Tom is challenged to face his grief and embrace faith in the darkest hours of his life.