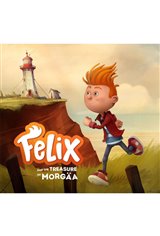 Felix and the Treasure of Morgäa

Taking advantage of his mother's absence as she departs on a cruise ship for some rest and relaxation, 12-year-old Félix sets out to find his father, a fisherman who disappeared at sea two years earlier. Using cunning means to escape the vigilance of his aunt, who is in charge of watching over him and his little sister, Felix gets on board a boat belonging to Tom, the old lighthouse keeper, whom he has persuaded to help him. Their destination: the Island of Eternal Night, which according to legend, is inhabited by the Morgäa spider, guardian of a fabulous treasure that the boy's father coveted. Arriving safe and sound on the island, Félix, flanked by his cat who thinks he is a dog, and Tom, accompanied by his faithful parrot, make an astonishing discovery.