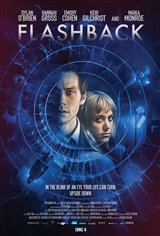 Fred Fitzell (Dylan O'Brien) is a normal guy approaching his thirties and going through the things most people go through. He's struggling with whether he should get a corporate job and let go of his dream of being an artist. He's wondering if he should commit to his girlfriend.

After a chance encounter with a man forgotten from his youth, Fred literally and metaphorically journeys into his past. He slowly begins to unravel a long hidden mystery about a missing girl, a drug called Mercury, and a terrifying creature that followed him into adulthood.

As past, present and future begin to intersect and parallel each other, Fred has to choose between all the possible lives he could lead.

Canadian Connection: Filmed in Toronto. A number of cast members, including Hannah Gross and Liisa Repo-Martell, are Canadian.;