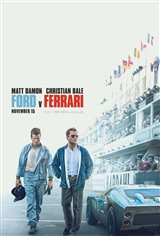 Determined to have a Ford car win the prestigious race, they have Shelby and a team of American engineers and designers build an entirely new automobile that will have the potential to finally win the race, with British driver Ken Miles (Christian Bale) at the wheel.