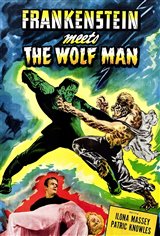 Lawrence Stewart Talbot (Lon Chaney Jr.) is plagued by a physical oddity that turns him into a crazed werewolf after sundown. His desire to rid himself of this ailment leads him to the castle owned by mad scientist Dr. Frankenstein.

Frankenstein, it turns out, is now dead, yet Talbot believes that the scientist's daughter, Baroness Elsa Frankenstein (Ilona Massey), can help him. However, his quest to right himself puts him on a collision course with Frankenstein's monster (Bela Lugosi).